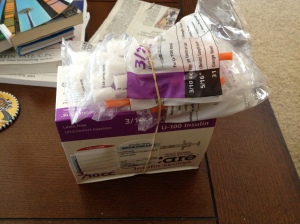 My pharmacy’s EXACT count of a 30-day supply of syringes. Those cheap bastards.

Normally, I’m an advocate for taking “vacations” from the insulin pumps and now, CGM every now and then. Being tethered to something 24/7 can feel daunting and a bit draining after a while. And if the resources present itself, going on shots for a little bit probably won’t hurt thee ol’ A1C much.

I take it all back.

I’ve been back on Lantus for 2 days now and I really want my pump back. I know that the Lantus will work out better for me over the weekend, but shit, I’m having a rough time.

My CDE recommended a Lantus dosage similar to my TDB (total daily basal) amount. I am on over 14 units of basal per day, but of course it’s not a nice neat number for my syringes. I took 14 units back in January when my pump fried unexpectedly and it was manageable. But since I’ve bumped up my rates a bit on my pump, CDE suggested heading up to 15 units of Lantus for the days I wasn’t as active and then dropping to 14 on my show dates.

I tried 14 units on my first day and it was okay. A few 70s here and there, but I think mostly because I was over-doing my meal injections. I figured I could bump up slightly to about 14.5-ish units so I could have more support throughout the day. (Still saw some post meal spikes and stays after dinner.)

I head to sleep with a 91 mg/dl and a small snack in my stomach. I was already coming down from a correction I had made at 9 pm, but my snack made my BG rise to 130 mg/dl, so I gave a conservative injection to cover most of the snack I ate.

Some time during the middle of the night, my fight or flight instinct kicked in and I bounced into the kitchen to check myself. Ah, shoot. Okay – guess I took too much for that snack. I feel – eh – maybe in the high 50s. Extremely hungry. Spots forming in my vision. But, for the most part, coherent enough to test and treat.

Me: Wait, what? How am I still standing? Oh… hey, juice now.

Hot damn, really? 28? The sad part about it is that I really didn’t want to eat anything. I had my juice, waited, had a graham cracker, waited, had a small glass of milk because I was really thirsty. Continued to check every 10 minutes and finally felt safe heading to bed with a BG of 72. Woke up at around 6:00 with a 188 mg/dl.

So – now I’m trying to figure my culprit. Did I stack too many humalog doses? Did I stack my Lantus? Was it a combo of everything? Was my pancreas really upset that I self-tanned again and this was payback? (No – not really. But at least I would have looked good for the paramedics?)

I’m also just having lows all the damn time now, mostly because I can’t do math and keep track of time. And it’s really rough not having those middle of the night alarms, even though I love to hate them. It’s fine. It’s only a few more days of this madness.