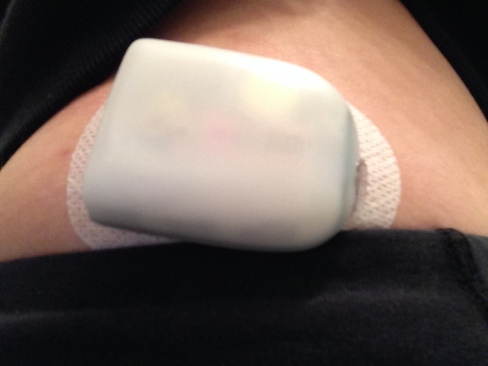 My OmniPod demo kits (yes, kits… for some reason they sent two) came in yesterday. My sensor died this morning, so I had some extra real estate on my hip to try it. And lucky (?) for me, I was home all day due to illness, so plenty of time to admire… or whatever.

First, this is apparently the “slimmer” version of the Pod. The Pods used to be a lot bulkier. I mean, they are pretty big to begin with… I can only imagine what they were! There is a good half inch protruding off of my side, covered by a sweatshirt. But imagine if I were just wearing one of my dance shirts or something. My hubby made the observation that at least with the wired pump, you can conceal it a little bit better. This is just stuck to you for 3 days.

Secondly, I know they said that the demo Pods are just that – Pods with no working parts. The self-inserting cannula is only inserted when you tell your little PDM to do so. I kinda wish I could have tried out that feature too. Because there’s nothing like jabbing yourself with a needle you can’t see after you’d committed to buying it for the next 4 years.

Next, I tried sleeping on it because that’s kind of a sticking point with me. If this plastic shell is going to be a attached to me all the time, I can’t throw it to my side or in a pocket while I sleep. It wasn’t horrible to sleep on. But – again, without having a cannula jabbing me in the side like some of my Quick Sets do, it’s hard to tell what this would be like on a night to night basis.

Verdict: Eh. I dunno. I wanted to give them the benefit of the doubt because the wireless thing is actually really handy. But it’s features probably aren’t really for me.

What’s next? Well, I’m still waiting for Tandem to respond to my fax, but I am starting to wonder if they actually received it. I also found out that, even though the Asante Snap is based out a Northern California town, the four week trial is not available to people in my region… which is Northern California. Huh. So – maybe the Ping?