This post has been sitting in my Drafts for about two weeks now. Work just hasn’t let me not work recently, and by the time I come home, I’m exhausted. Blogging smogging. But it’s “wordless Wednesday” still, and this post has lots of photos. But also lots of words.

So I named the new Dexcom “Dex” for obvious reasons.

See what I mean? (That’s the calibration symbol by the way.) 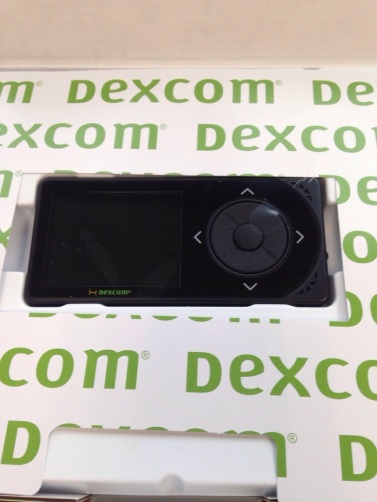 Dex arrived on the 11th in its shiny box-ness. There were really detailed pictograms and instructions, but the supplier I purchased this all from said the YouTube tutorials was where it was at.

I have to admit I felt like something was missing – the sensor inserters! I was told everything was included, except for maybe the tape to keep the adhesive down. But MedT always made me buy some other Insertion device, so I got really confused. Turns out the sensors are all inclusive and the inserters are one-time use, disposable plungers, so to speak.

So after a quick couple views of the instructions and 2 viewings of the YouTube tutorial, I decided to place my first sensor. It was a little weird, but definitely NOT painful or jarring like the old Sof Sensors were. But I wanted to let the sensor marinate overnight, thinking I’d get a quicker calibration period like the MedTs do.

Apparently Dex’s don’t work like that. You need to wait the full two hours after you start a sensor, regardless if it’s been sitting in your system for 8 hours. Hmph. It didn’t do me much good because an hour and half into my sensor start, I got this.

Apparently this is Dex’s “Sensor Error.” If you are a MedT user, you know these generally figure themselves out eventually. This did too.

And we’re back to normal. Time for calibration! Naturally, I just wanted to finger-stick myself all day to check the accuracy. I couldn’t help it! However, my fingers probably wished I hadn’t.

Not identical, but mostly in range.

Of course I was having a banner blood sugar day and I wanted to test the effectiveness of the sensor, so I gave it a test.

Actually, it wasn’t really worth the carb counting, but I’ve never had one before, so why not. It didn’t come without debate because I’d been having a no-hitter for the last few hours. Why mess with it? Oh well. 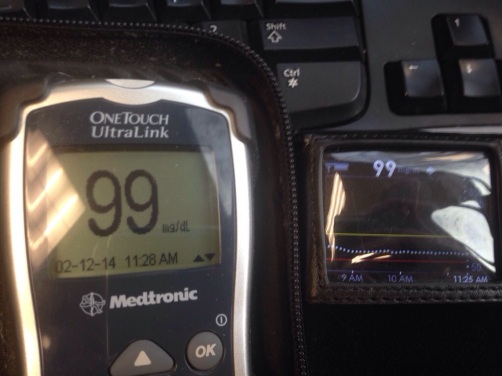 I did get a matchy some time after the macaroon! So that was exciting.

It’s not without it’s downfalls and quirks, however. While 95% of my low alarms have been legit, I still have trouble with CGMs recognizing how high I am. That was among my complaints with the Sof Sensors. The give and take accuracy was never giving and taking in the correct direction. I’ve had the same problem with the Dex.

Also – that disclaimer about the Dex running higher than normal after you take Tylenol? Totally legit, which is kind of a bummer if I take something for a headache or cramps right before bed. (Guess I won’t be sleeping much tonight again.)

I also never really got a personalized phone call from Dexcom, the company, after I received my Dex. I got a RoboCall, telling me that if I had any additional questions, I should call their Help Line. Alright fine… but no account manager, no customer service reach out… nothing. I mean, I figured it out on my own, but I thought it was weird from a service stand point.

I’m on my second sensor. I tried to go beyond the 7 days on my first sensor like everyone else does, but I got more “???” signs, meaning my sensor was probably in a rough spot. (My stomach is never a good place for sensors.) The sensor in my hip seems to be working just fine.

I also don’t completely trust the Dex yet. In fact, it’s too the point where I’m checking so often, my CDE doesn’t need the Dexcom trending graphs to see what my blood sugars are doing every hour. Yes – my fingers are really sore.

Carrying two devices is also a little weird, but it’s got such a kick ass range, I don’t feel like I need to carry it around all the time in my pocket. It stays on my desk at work for reference and I’ll take it with me if I leave the office for an extended period of time. I set it on a table at the dance studio during a private lesson. It stays on my nightstand while I sleep.