It appears I missed Day 2’s prompt – the Diabetes Poetry Slam. (i.e. Write a poem, rhyme, ballad, haiku, or any other form of poetry about diabetes.) I had a couple songs stuck in my head yesterday… does that count? No? Okay, I’ll humor you with a haiku:

Fifteen, wait fifteen
Versus the contents of my
Refrigerator.

<Beatnik snaps all around>

Okay, now on to less humorous items. Let’s talk about our feelings.

May is Mental Health Month so now seems like a great time to explore the emotional side of living with, or caring for someone with, diabetes. What things can make dealing with diabetes an emotional issue for you and / or your loved one, and how do you cope?

Nothing stirs up emotions like a pregnancy. Not just because your hormones are running rampant, but the mix of excitement and fear can make all rational thought exit stage left for 9 months. Add a chronic illness to the mix, and it’s a wonder how any T1 moms survive the pregnancy with their sanity.

I’ll openly admit to anyone that asks that I’m not having fun during my pregnancy. It’s not because of the morning sickness, or the body image issues, or the back pain, but it’s that I’m too busy dealing with numbers to actually enjoy “being pregnant.” Controlling my blood sugars is a chore now more than ever. Rather than stressing over nursery decor and child care, I’m worried about the 69 mg/dl I had one hour after eating dinner… and the pending 200 that will probably show up later.

Diabetes with pregnancy is all about numbers. Are they too high after a meal? Can you increase your basal without dipping too low in the middle of the night? How many carbs can you stand to eat without bolusing again because you think the 3 units you already have on board might cover it. (Sometimes it does… other times it really doesn’t.) The game changes daily… hourly. This is one giant math problem I can’t solve. And I don’t really think math is that fun to begin with.

Diabetes not only effects me personally, but those around me, and most importantly, the person growing inside me. And that’s a HUGE guilt trip. Usually, when a stubborn high plagues my afternoon, it only effects me. It’s my burden… my consequences alone. Now? It 100% effects someone else… someone who also doesn’t have a say in what this disease will do, despite my micro-managed efforts.

Diabetes consumes every ounce of this experience. At my 15 week appointment, I spent 20 minutes going over blood sugars, problems I was having with control, suggestions and ideas I had, patterns I saw, all while the Resident took notes for the head OB to review collectively with me before changing my pump settings again. She left to go find the head OB, but returned two minutes later and asked, “hey, do you want to hear the heartbeat?” We were both so caught up in the numbers game that we forgot about the real reason I was supposed to be there – to check on the baby.

So after all of this – why on earth would any sane, fertile woman of childbearing age with T1 ever want to have kids?

Well, this is my reason: 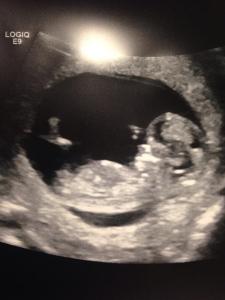 It’s hard to explain. I know deep down that my efforts, despite my fleeting sanity, will be worth it come October. The things like a nursery, shopping and the whole “nesting” thing will come along soon enough. I know I don’t have time to do a lot of things that I should be doing at this point, but I don’t feel it’s as important as making sure this kid comes out into the world healthy. And that end goal is important enough to me to keep a level head.