After debating back and forth on whether this was actually going to happen, I signed up today to be a part of, what may be, my last spring showcase. Yes, I’m aware that I said this LAST year. And said it again in December. But dance teachers always lie when they shout, “one more time!” to a class… why can’t I?

My instructor proposed a song in December that I kind of liked but wrote off quickly because it was a Viennese Waltz. I didn’t want to take on a V Waltz because of all the spinning, the speed, and stamina required for a three minute routine, only to have to quit due to the off chance I end up pregnant some time before May. If open right turns are nauseating now, imagine them with morning sickness. <hurl>

Then I went through the phase that every dancer goes through when picking a song for a routine. I skipped through every single song on my iPod because nothing sounded good. Absolutely nothing. You want it to be good because you’ll be listening to it non-stop for the next three months, not to mention coordinating costuming, make up, emotions, whatnot… It’s a big deal to pick a song. It’s like picking a wedding dress (every 6 months)! After picking all of my routine songs in the past, I wasn’t just going to jump on the first song my instructor suggested. That’s unheard of.

I made a playlist of potential songs, all for different dance styles and routines ranging from lighthearted and cute to melodramatic and angsty. (And one from the Twilight soundtrack… but we won’t discuss that.) I spent two-ish hours with my instructor listening for the perfect song even though we already found it: the song we heard in December.

I didn’t realize it was perfect until I started tearing up in my car driving into work one morning listening to the song on repeat. It happens. You are feeling particularly down, with a lot on your mind (read: hormonal), and a song pops on that just lets the flood gates open freely. I didn’t actually get to the point of crocodile tears during my commute (awkward), but I was definitely at the point where if someone were to ask if I were okay, I’d squeak “I’m fine” when I’m not really.

Here is the premise: it’s a breakup song. The end of a relationship. Nothing fits or feels right because said asshole isn’t around anymore. We’ve heard it all before. But in an attempt to reconcile, the songwriter indicates that if he comes around again, she’ll welcome him back and carry on. (Take the chain off the door, as she puts it.)

Now, I’m not ending any relationships with real people these days (at least I hope not). However, I cried over the song because I am, supposedly, ending my relationship with dance. As much as I would like to continue it full time, the whole “being a diabetic mom” thing seems to be taking precedent. It’s time to move on and try something new. This is more than just a pretty song to me; it’s my chance to say good bye. But it’s one of those hobbies and passions (and families) that would accept me back with open arms, should I ever come around again.

My attempt to explain this today during my choreography session fell short. (And again, near tears.) I try not to make it a habit to cry during lessons and generally do quite well. However I offered my instructor no guarantees for this one.

So I think he needs to practice saying this: 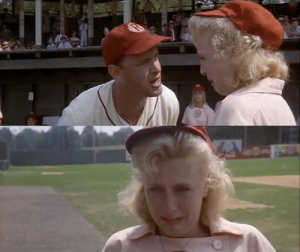 “There’s no crying in v waltz!”

Okay, maybe not exactly like that… you get the idea…