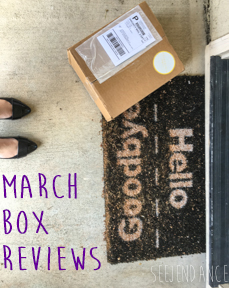 I’m trying something a bit different for this month since I received THREE boxes from a subscription-like shopping service this month. (YAY spring capsule shopping.) But rather than writing three separate posts about them, I’ve combined them into one review – for my own sanity.

This month, I got a Stitch Fix box with Sophie O. as my stylist again; another tote from KB at Golden Tote, and I tried Trunk Club with Carey Lee. My goal was to secure some items for the next three months. I threw in Trunk Club this month because I liked that I could call or message my stylist directly and tell her exactly what I wanted. In this instance, I needed some wardrobe basics – something that was sorely missing from the last season’s capsule. Since Trunk Club is essentially a personal shopper at Nordstrom’s, I knew I’d get some high quality items that I could use year round. And the other two shopping services would be great for seasonal, trendy pieces. (Affiliate links at the end of blog.)

Let’s start with the Stitch Fix Box. As mentioned, my stylist was Sophie O. again from February’s Fix. I liked what she did and requested her again in my March note. Her note to me was longer, and a bit more personalized, mentioning that she tried to find as much as she could based on my requests and couldn’t wait to get items set for my capsule. I had asked for some jeans, a trench coat, and some other fun spring items. 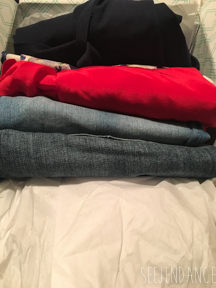 Here is what I kept: 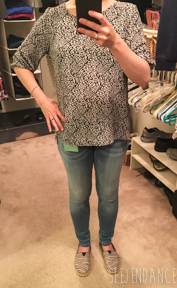 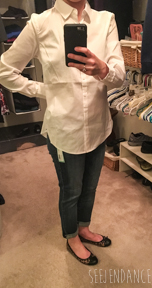 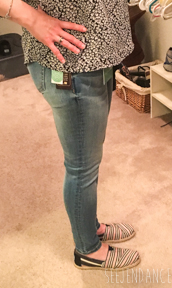 I haven’t kept a pair of jeans since my first postpartum fix last spring. Now that I’m chasing a very active toddler, the jeans aren’t holding up like they once were. (Unless I have an industrial strength belt.) Sophie sent me two pairs of Kut from the Kloth Jeans – one Dayna Skinny ($88) and one Catherine Boyfriend cut ($78).

A word about Kut from the Kloth – these things stretch and run slightly larger. They don’t always hold their size so some will advise you to size down. The skinnies were actually bit on the tight side, however, I kept them knowing they’d probably stretch out. The boyfriend jeans were actually the first pair of this cut where they didn’t feel like “mom jeans.” My only concern is that while they fit great now, they won’t after a few wears. I guess we’ll see.

I styled these with an old Skies are Blue blouse I received last fall, a pair of TOMS I received from my Trunk Club stylist, and a white button down from TC which was returned due to sizing issues.

What I didn’t keep: 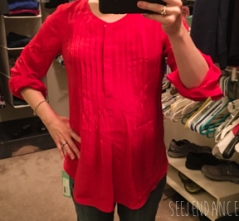 I had Pinned the Collective Concepts Katelynn Dress ($78) because the print was super fun and wedding season appropriate. However, it ran larger in the torso and sleeve area. It looked cute belted and with a cardigan, but I know I would not take the time to alter it. I did “keep” it, but I ended up selling it to someone on a BST group.

The 41Hawthorn Crue Belted Trench Jacket ($98) I received was more like a peacoat. Much heavier than I was expecting and not at all waterproof. This would have been great in winter, but not in spring. Shame – it actually fit really nicely, but I had no use for it.

The last item was a Daniel Rainn Bilson Silk Tabsleeve Blouse ($88) that is very similar to every other tab sleeve blouse I own already. Except this was silk and made me look pregnant. Nope, nope, nope. 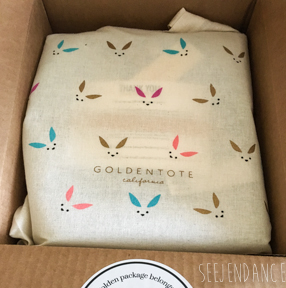 For instructions on how Golden Tote works, check out my review of the February tote here. I’ll admit that the one of the reasons I tried Golden Tote again in March was because of this month’s tote style. I love bunnies! Truth be told, I found no interest in any of the items you could choose from this month’s boutique. Everything was a bit too BoHo/southwestern for my tastes. But, they did have a pair of jeans and a few other “classic” items available. I also had one of the stylists on the BST group help update my profile comments and I used a photo collage rather than a single image in my profile. These two add-ons actually helped a LOT with my surprise items. 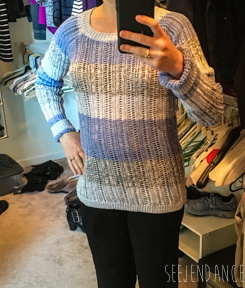 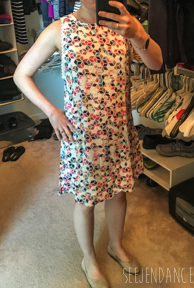 I ordered a large Tote with two chosen items for $149. I received 6 items total, but decided to “keep” 4. One of my chosen items was a pair of black Ellison cropped trousers (Rise to the Crop Trousers in the boutique). They aren’t all that cropped on me, so I’ll have to get them hemmed or just wear them as regular pants, but they were trousers with pockets! A rare find, I feel.

Three of my surprise items were home runs, KB. I received a purple (!) pleated blouse by Naked Zebra, a light blue colorblock sweater from Skies are Blue, and a Paper Crane Geometric Print sun dress. The sundress will need some creative styling since the arm holes are huge, but it should be great for the warmer weather.

What I Didn’t Keep 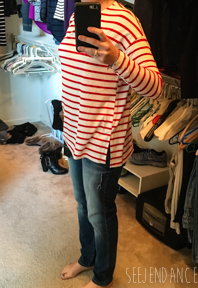 I ended up selling/trading two items from my Tote, but would have been pleased with them if the sizing was correct. For example, I really liked the Jolie Striped top, but I swam in it. And the Distressed Boyfriend Jeans were the perfect length and comfort, but I definitely needed to size down on them.

A Little Bit About Trunk Club 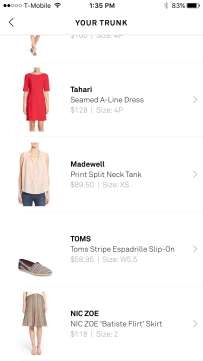 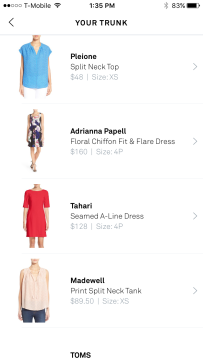 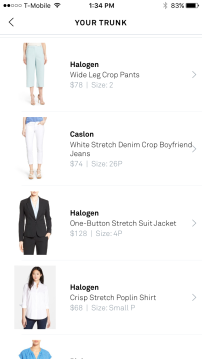 Trunk Club styles both men and women and is based out of Chicago. As mentioned above, I wanted some very specific items I had a hard time finding online on ThredUp or Target or wherever I could managed to sneak away shopping. Trunk Club is not really a subscription service at all – more like walking into Macy’s and Nordstrom and heading to the Personal Shopping department. There are no subscription or styling fees. But the prices are Nordstrom prices, so be prepared if you decide to try it.

After signing up, my original stylist called me and found out all of my likes, dislikes, goals, styling preferences and so forth. I signed up based on the recommendation of a friend, so I was transferred to her stylist, Carey, so we could both get some sort of referral credit. (Cool.) Carey prepared a “trunk” of about 15 items for me based on my notes, and sent them to me to preview. At that point, I was allowed to remove items I knew were too expensive, not my style, or something I already owned. The remaining items were shipped to me to try on and return after 10 days.

I ended up keeping a pair of TOMS and a black blazer. Carey indicated that the first Trunk can be a little rough while the stylist tries to figure out a person’s style and size. So I look forward to my follow up Trunk. Carey has also been very good about keeping my items affordable and low maintenance (which is a plus when you have a toddler.) She will throw in a few pricey items here and there, but the majority of the items I see are within Stitch Fix pricing guidelines. They have a much larger petite inventory to choose from. (Something I’m struggling with in Stitch Fix and Golden Tote.)

If you would like to try any of these services, you can use one or all of these (affiliate) links: Stitch Fix, Golden Tote, or Trunk Club. Golden Tote’s April Tote is going to be released on April 4th, so get that profile ready for the craziness. Previews for the April chosens are being leaked on Instagram and will probably be on their Tumblr page here soon.

As far as Stitch Fix goes, I have decided to keep Sophie O. as my stylist (because she’s been doing awesome), but switch my box subscription to every quarter, rather than monthly. My wallet should love that. (Plus that whole, don’t shop during a capsule season rule thing…)