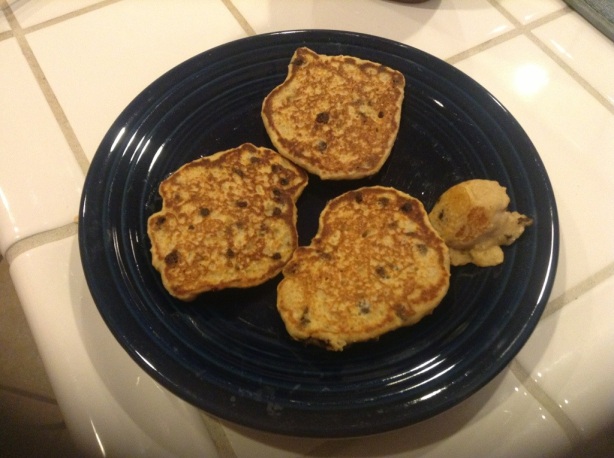 To celebrate, we made these tonight for dinner. (Mostly because I didn’t think I could stomach anything else.)

A couple of edits.

They are incredibly dense and 3 small pancakes definitely fills you up. And there weren’t carb breakdowns, so I guessed. (Incorrectly of course, but that could also be the flu I’m fighting.)

I ended the evening by finally sitting down and watching Pitch Perfect, which was way more entertaining than my earlier choice, Forks over Knives. Forks over Knives is a documentary that promotes a vegan lifestyle, which I sort of got into, but I like my chicken, eggs, cheese and fish, thanks. Don’t get me wrong – eliminating processed foods and refined sugars is a good thing. Eating more veggies and plant based items is also a good thing. However, the occasional grass fed hamburger isn’t going to be the death of me. It also conflicts with everything that the Paleo diet stands for. (No grains, all animal food sources.) Since I’m not into either extreme, though I pick and choose when I can, I’m all for a “well balanced diet” that encompasses all things and substitutes when appropriate.

For the record, I have tried vegetarianism. I’ll be the first to admit that I didn’t do it correctly. One can’t live on peanut butter and cheese as protein sources alone. My blood sugars were so erratic. My CDE and dietician thought I was nuts. (And probably secretly wished I ate more chicken.) That lasted about five months. Can’t say I saw the same results that those documented did.

But, I’m not the diabetics they were talking about. Ha. No one is rushing over to change my diet to “reverse my diabetes” and really they shouldn’t. This organ of mine is dead and staying dead.